“A different story” is the latest play by Mr. Ellis Lopes. It will be performed on the first of December 2008, World Aids Day in the Community Centre of Saint Eustatius.

The play is about the dilemma of an 18 year old young man, Timothy, who has Aids and wants to have a girlfriend. His mother infected him during pregnancy and died during his birth. His aunt and her husband take care of him, and have their hands full, as he is not an easy case to handle. 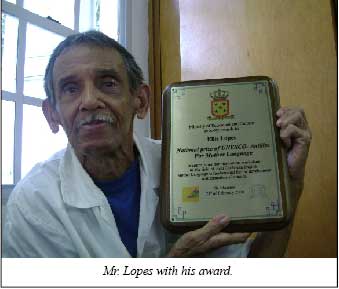 This will be a benefit performance to raise money for Aids. Shanna Mercera-Gibbs, Aids Committee coordinator has a role in the play and Marvin Ellis plays the part of Timothy.

Mr. Lopes wrote 14 plays and 6 skits. His father, Vincent Lopes wrote skits as well, which were performed with much success. Writing plays began with a drama festival in Aruba in 1978.

Mr. Lopes moved back to Statia in 1976. He was born in Statia, but spent most of his childhood years with his mother in Aruba.

As a young man, he worked at the Lago oil refinery. When he was twenty years of age, the young Ellis came back to Statia for the first time since he left the island. That was in 1956, two years after the founding of the Netherlands Antilles. Mr. Ellis Lopes had many younger brothers and sisters here on Statia. His father, Vincent Lopes was a member of the first Island Council as a Deputy (that’s what they call a Commissioner these days). The young Ellis Lopes hadn’t seen his father in a long time.

Before he left with the “Antilia”, the ship that went from island to island in the Netherlands Antilles in those days, he asked his mother what to do: “Should I hug him, or shake his hand?” His mother said: “Don’t worry, you will know what to do…” The passengers were picked up by a rowboat. Ellis Lopes was driven to his father’s house in Mr. Pandts’ car, at that time the only car on the island. And by the gate of his house, his father stood with arms wide open, ready to hug his oldest son. Mr. Ellis Lopes liked Statia. Aruba was much more developed and on Statia time had stood still. He could feel history’s presence in every corner.

In 1960 Mr. Lopes emigrated to the U.S. His boss at the oil refinery suggested that he could be successful in the art field there. He saved money and got himself a green card. He was very lucky that it took him only 6 months to obtain this much sought after piece of paper. He went to New York to find a job. Then the Cuba crisis began and he was enlisted in the Army. He spent 18 months training in New Jersey and 18 months in Alaska. These army days were the best days of his life. In Alaska he did voluntary work in the Anchorage community. He sang with a choir, even went on television. After his army period he started to work in New York making catalogues for an art department store. He would work from 9 to 5 and then he would go to his nighttime job. He worked from 6 to 10 as a dance instructor. He had to teach the class the different steps. Ladies stood at the right, men at the left. He would turn to one side and teach the men ‘the men’s steps’ and then he would turn to the other side and teach the ladies ‘the ladies’ steps’. In between classes, he would always keep walking, because he was too tired to sit down.

When he went to Aruba for a vacation, he was on television. He was the first professional dancer from Aruba. His mother always used to say: “Don’t tell ‘m you’re Aruban, tell ‘m you’re a Statia-man!”

In 1976, Mr. Lopes moved to Statia. When in 1978 the late Christine Flanders asked him to write a play to perform for the
Aruba Theatre Festival, he hesitated. He had never written a play in his life! She suggested that he could use an existing play. He adapted it to fit the Statia situation and called it. : “Mrs. Warren’s predicaments”. The Saint Eustatius Action Theatre was born.

It took Mr. Lopes a few years to start writing plays himself. His first play was performed in 1983, it was called: “Independence .... our slow death.” In these days, people already talked about independence. Independence of the Windward Islands from the Netherlands Antilles.

Mr. Lopes’ plays always cover social issues. He always uses things he hears people say or articles he saw in the newspaper. Once he heard a man say: “I didn’t ask to be born, so let my parents take care of me…” and it became an important phrase in one of his plays.

When Mr. Lopes is in the process of writing a play, he begins with the casting. He finds people who want to play a character in the play. Then, he writes to suit the characters. When he writes, he reads the words out loud. The characters answer and that’s what he writes down.

One of the plays Mr. Lopes wrote won the National Price for Mother Language (exact name). “The Juggler” has never been performed, but was adapted as a film script. The main character, Dan, is a “juggler”. “Juggling” is a word that Ellis Lopes made up himself. Dan juggles his wife and two other ladies at the same time.

When he is infected with the aids virus, his world and the world of his family and his mistresses falls apart. The play is full of drama, violence, and the dialogues are in the Statia dialect. A few lines from the dialogues in the play:

“You wid child for him and he feel tha yoh trick him!”
“If you done meet wid she, she might goh to yoh house!”
“You got two byside and yoh take dem the same place?”
“Woman, don’t make me get vex and floor you, you know!”

With the Action Theatre Group, Mr, Lopes performed in the U.S. and Canada, across the islands of the Dutch Antilles and in Holland and Belgium.