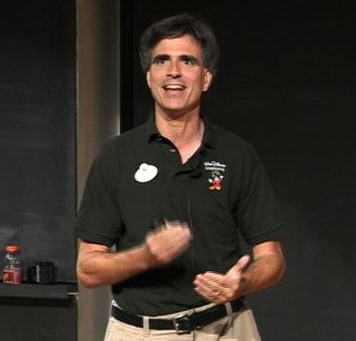 Randy Pausch, the university professor who created a “last lecture” celebrating life in the face of terminal cancer, has died aged 47. The lecture entitled ‘Really Achieving Your Childhood Dreams’ became a best-selling book (see Amazon books at the bottom of this page). The video of the inspirational lecture became a hit on the internet, where it was viewed by millions of people (view the video on this page).

Pausch said that he had delivered the lecture as a guide for his three young children. He died of pancreatic cancer at his home in Virginia. He knew he was going to die soon, so he wrote and delivered his ‘last lecture’ to his students, which was later broadcast by television and turned into a book. Pausch said he learned most from the dreams he had not achieved in life, such as his desire to be a professional football player.

“I’m attempting to put myself in a bottle that will one day wash up on the beach for my children”, the university quoted him as saying. The book, published in April, has been translated into 30 languages and has become an international bestseller. We truly recommend this book to all ARCO-readers.