Light is the veil of god 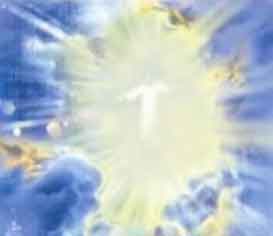 The broad conclusion is, then, that God is beyond light. There is a Sun beyond the sun, in other words. But who is to say that the Biblical text could not mean that God is both the light and that which is beyond the light? In other words, maybe the Creator and the created are one? Viewed thus, God is both the Sun beyond the sun and the physical sun we see in the skies (the source of all light)? The Biblical text does not tell us. We ourselves have to ponder this.

As said before, Biblical texts do not prove anything scientifically. They inspire. They help us think and meditate. And wonder, in this case about what might be beyond light, beyond the visible universe? The Bible should not be taken literally.

Was there a beginning?

Some people maintain that there never was a beginning. They believe that light (and the resulting universe) never had any origin, no Big Bang, no point of departure, no initial spark. The Universe simply is, always has been and always will be. No beginning and no end, like a circle This thinking rings true, because it is hard to imagine how nothing could give rise to something.But - even if we assume that the Universe never had a beginning, that it always has been and always will be -,then still the question remains, if there could not be something beyond? If we say there’s not, our inquiry ends here. If, however, we believe that there could be, then the question is if this Great Beyond is within our powers of realization? We think partially, maybe.

Beyond light, we see a wall which we cannot call light and which we cannot penetrate with our reasoning mind.But it is not darkness, for darkness is the absence of light and light cannot have its origin therefrom. We can study light, but the Negative Existence beyond the wall is outside the range of our realization. The light itself thus veils what is beyond.

God’s influence
The Qabalah confirms this conclusion. It states that there is something beyond light and this something is indeed beyond our realization. As said, they call it the ‘Unmanifest’ or ‘Negative Existence’. But it adds that although it is outside the range of our realization, we are not outside the range of its influence. Therefore, we cannot dismiss it simply as non-existent and be done with it. It influences our lives and it does not go away.

Light and life somehow have their roots in the unknown Negative Existence. But although we cannot know it directly, we do experience it. Dion Fortune expresses the thought thus: ‘(...) Although we cannot know its nature, we know its effects, in the same way as we are ignorant of the nature of electricity, yet we are able to turn it to good account in our lives, and from our experience of its effects we are able to come to certain conclusions concerning some at least of the qualities it must possess’ (Dion Fortune, ‘Mystical Qabalah’, page 34, Samuel Weiser, 1986).