Nature is to Man as Man is to God 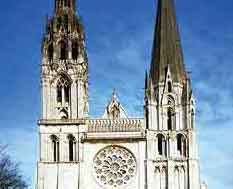 As Alexander Pope did when he wrote:

Know then thyself, presume not God to scan;
the proper study of mankind is Man.
Placed on this isthmus of a middle state,
a being darkly wise and rudely great:
With too much knowledge for the Sceptic side,
with too much weakness for the Stoic’s pride,
he hangs between; in doubt to act or rest,
in doubt to deem himself a God or Beast,
in doubt his mind or body to prefer;
Born but to die and reasoning but to err;
Alike in ignorance, his reason such
whether he thinks too little or too much:
Chaos of thought and passion, all confused;
Still by himself abused or disabused;
Created half to rise and half to fall;
Great lord of all things, yet a prey to all;
Sole judge of truth, in endless error hurled:
The glory, jest, and riddle of the world!

Which takes us to Einstein, who said:

Science without religion is lame; religion without science is blind.

Now, we do not refer to the Golden Ratio and Einstein to prove that faith is reasonable, for we know we can’t prove that. Ultimately we cannot prove anything. But we believe faith is reasonable. Isn’t that an interesting paradox? During his recent trip to Turkey Pope Benedict XVI said that reason is not incompatible with faith. The Pope has a point. And again he is on the spot to point this out at this point in time (did you notice the three points?).

Basically the Pope is saying (which he also said during his controversial speech at Regensburg University) that religion, rightly understood, is the highest form of reason. In other words, anything that is unreasonable in faith should be thrown out. If we do that, we logically end up with the highest reason and the highest faith. Then faith and reason are one. We do not offer this as a clever argument. We really mean it. If you follow the Pope’s reasoning to its ultimate conclusion, that is what he is saying. And we agree.

Faith is Reason
Now, the Pope did not say it quite as radically as we have summarized it here, but he did try to reconcile faith and reason. That is a good thing. It is good, because many people have a viewpoint which can be summarized as follows: ‘As God is not a measurable object, He cannot be studied’. In other words, a scientist and anybody who believes in reason, must reject any and all notions of faith and God, as though the two were irreconcilable. By stressing the factor of reason in religion, the Pope is trying to say to scientists that they can adhere to scientific reason and at the same time be a Buddhist. Well, he probably means a Catholic, but is it reasonable of him only to mean a Catholic?