Lee is originally from Exeter, UK and spent his teenage years in Spain. In 2001,
he graduated in Marine Biology, specializing in Coastal Ecology. With a pas-
sion for conserving the marine environment and an interest in protected area management, Lee has since travelled, volunteered and worked around the globe. 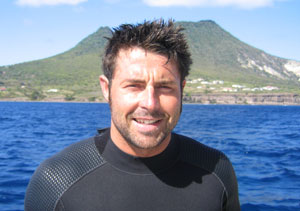 The national parks system was initiated by the Island Government in 1996 to protect diverse habitats on and around the island. The Government delegated management authority for the parks to a local NGO – St Eustatius National Parks Foundation.

Stenapa has eight staff-members and four interns. They currently have two volunteers from abroad, with eight volunteers due to start at the beginning of June. People come from all over the world to volunteer, they camp at the botanical garden and Stenapa offers them meals and exciting projects to work on.

One of Lee’s projects is the “Sea Turtle protection program”. On Zeelandia beach, three species nest. From April to July, the Leatherback Turtle comes to lay her eggs. From June to October the Green Turtle and the Hawkbill Turtle nest. In this period, there is a patrol on Zeelandia Beach most nights as they can predict the nesting cycle. Stenapa needs many volunteers for that.

Lee and his coworkers have seen the Leatherback Turtles make their nests and lay their eggs. They dig a hole about 60 cm deep with their rear flippers and it’s amazing to see the dexterity of such a large animal. Then they lay approximately 100 eggs and then disappear into the sea to mate again. Sometimes Lee has to relocate the nests, when they are too close to the sea or to close to the vegetation.

The turtles return within 9 to 12 days to lay more eggs. The eggs come out after a two month incubation period. This year four Leatherback Turtles nested at Zeelandia, of which two were tagged here before. Lee tagged the flipper of the new arrivals. It is estimated that out of a thousand eggs, only one will make it to adulthood. The world’s turtle populations are declining, so it is very important to work hard to protect them. Besides monitoring them, it is also important to generate public awareness. Zeelandia Beach is a sensitive area and people who visit should consider what is happening there and respect the area during the nesting season.

What threatens the Turtle at this moment are three things. First of all the Sand Mining. People need sand for building houses and they take it from the protected beach which is illegal. That must stop.

Third: It’s forbidden to drive a car or ride a quad bike on Zeelandia beach, some people still do that.

Here on Statia people should be aware that National Parks and wildlife attract tourism. If nature is protected, Statia’s economy will benefit in the long run.