What is interfaith spirituality?

The definition of the Center for Economic & Social Justice (‘CESJ’ ) is as good as any:

‘There is a Source of all creation and of all universal and absolute values such as Truth, Love and Justice, which represent the ultimate ends of human actions. Many people call this Source, God’.

We prefer to substitute the word ‘Solidarity’ for ‘Love’ without any significant change of meaning. ‘Love’ is a more personal concept than ‘solidarity’, which is the particular kind of love at the heart of ‘Solidarism’ as a socio-economic model (‘solidarity’ to be understood as ‘agape’). ‘Love’ refers to ‘agape’ as well, but refers with more emphasis to interaction within the human family rather than within society.

Compare the CESJ-definition of ‘Interfaith Spirituality’ to Buddhist thinking in which there is not even a generally accepted word for ‘God’. Any word or description would limit the concept of an eternal and limitless God. Therefore it suffices to say that ‘God is Nothing’, i.e. no thing. Whatever God may be, He/She/It is not a material thing, i.e. ‘No-Thing’. Where God is, all words fail. Silence is the only feasible response.

The second CESJ core value holds that ‘Nothing should stand between God and the human person’. Here the word ‘Nothing’ does not mean ‘No-Thing’. It just means that there is nothing between Man and God, i.e. no person, no priest, no creed. These two core values (the first one quoted above as the definition of Interfaith Spirituality) form the basis of Solidarism (called the Just Third Way by CESJ). This basis is so broad that adherents of all major religions can find themselves in it. This is intentional, for a socio-economic model creates structures for people and societies. People and societies adhere to many different religions. Therefore the model must be acceptable to adherents of all religions, if it aims to be universally adopted.

Why does a socio-economic model need an ‘interfaith spiritual’ basis at all? 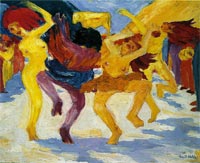 To tackle the last question first, the answer is obvious. Capitalism is based on the God of Capital, the ‘Golden Calf’ or Mammon. This is a god (or ‘spiritual entity’), after a fashion. But it is a brutal god, which has enslaved the majority of mankind, both haves and have-nots (the latter often aspiring to become capitalists, adoring the Golden Calf as much as most haves). This god is responsible for wide-spread poverty in the world, the charging of interest being one of its tools. The adoration of this god Mammon is enticing, but its reign is pleasurable for a short while only. And Mammon cannot be bound.

So, why does Solidarism need a spiritual basis? Again the answer is simple, really. Without a spiritual basis there is nothing. This is the Eternal Paradox. Nothing cannot give rise to Something. Yet whatever gave rise to Some-thing (the material world) cannot Itself be a material thing and must therefore be ‘No-Thing’ (i.e. no material thing, or ‘Spirit’). Somehow this No-Thing (or Spirit) concentrated a point (or Some-thing) containing the seed of Creation. 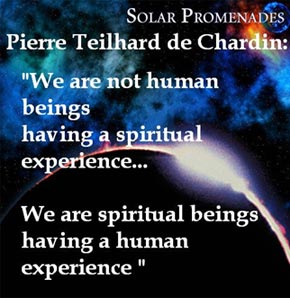 We could express this in ‘koan’-form thus: ‘Have you heard the beat of a lifeless heart?’ Figure it out. After you have exhausted your brain, you will come to the conclusion that ‘Life and Light dispersed’ must have an (incomprehensible) spiritual Origin, of which naught can be said.

But then still, why does Soli-darism need this incomprehen-sible spiritual Origin?

Recognition of the existence of a Spiritual Source is required to make sense of Man’s relationship to:

a) this Spiritual Source (referred to as God, Allah, Yehovah, or whatever),

b) his Fellow-man and

Without any such Source we would be islands on our own, each man to himself without any (spiritual) connection with one’s fellowman and Nature. It is the Source that unites and gives value (which is a non-material, hence spiritual concept). Without such a Source, all is material and there is no inherent value.

Therefore the CESJ-definition correctly states that the Source gives rise to ‘all universal and absolute values such as Truth, Love and Justice, which represent the ultimate ends of human actions’. The reverse is also true. Truth, Love and Justice lead to the Source. Solidarism (the Just Third Way) is a socio-economic model which aims to lay the (economic) foundation for a just society. If that is its aim, it cannot but be based on the Spiritual Source, without which there is nothing (certainly no ‘Justice’).

Now anyone claiming that we have done no more than turning an arbitrary definition inside out and then outside in again, is undoubtedly right. So basically it comes down to belief or an ‘inner knowing’. Our reason simply cannot conceive of a Universe without an ‘inside’ which gives rise to an outside, making it possible for this outside to be turned inside back upon itself again. So there you have it. We offer no proof. There is no proof that faith and reason are One. There is no proof that the circle can be squared. Nevertheless, we believe that it can. A better ‘explanation’ than the one given in these paragraphs we are unable to give. Therefore, let’s call it an unproved axiom: Solidarism is based on interfaith spirituality.

In what way is Solidarism linked to Ecology?

Solidarism is a socio-economic model. There is no obvious link between these two. Economy and ecology are two distinct disciplines, especially if it is presumed that reality is compartmentalized. But here again the root of interfaith spirituality connects the two. Ecology is the study of living Nature in relationship to Man and the environment in general (including the material world which is alive in its own way). It is the interfaith Source which connects Man to Nature and which makes the whole more than the sum of its parts (‘holism’).

Here again materialism (the belief that there is no spiritual Source) would lead to the conclusion that Man need not worry about Nature, only about its own self-interest. In this view, Nature is there for the taking and can be used or abused at will. In materialism no (moral) value forms an obstacle to the ruthless exploitation of Nature. Neither is there any positive (moral) incentive to care for Nature. In materialism the only possible reason to be more careful toward Nature would be the understanding that otherwise we would suffocate ourselves (a negative reason based on self-interest).

Seeing that interfaith spirituality is the basis of Solidarism it stands to reason that it should urge Love of Nature, leading to an ecologically sound (‘sustainable’) way of exploiting Nature. This is a positive reason for not abusing Nature.

Sustainability is a practical necessity

Solidarist economists are aware that the full application of Solidarism would lead to massive economic growth. This is sorely needed, too, if the aim is to provide the masses with the goods and services they need to live an abundant life (which is the Promise of Solidarism). Now if this massive growth is not linked to an equally massive effort to protect and preserve the biosphere, we would all suffocate indeed (cf. Beijing’s smog). This is a practical reason (a necessity, really) why Solidarism has embraced the idea of ecological sustainability and respect for the environment. We note that the predicted massive economic growth will at the same time provide the economic means necessary to be able to afford ecological sustainability! 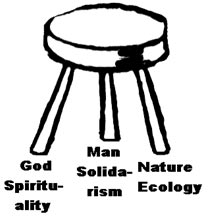 In the above paragraphs we have tried to explain that Solidarism, Interfaith Spirituality and Ecology are interrelated, like the three legs of a stool. If one leg should be missing, the stool will not stand. In a broad sense these three legs can be said to represent God, Man and Nature.

Perhaps these paragraphs do not convince (or convenience?) everyone. But we hope at least to have made the argument that without a spiritual Source there can be no Justice. And without Justice there can be no Just society. And we contend that the economic basis for a Just society is Solidarism, the Just Third Way (which has been developed on the basis of the economic theory known as ‘binary economics’ or ‘BE’). Those who have ears to hear will have heard.

The video explains the link between spirituality and ecology in its own way, a very appropriate supplement to this article. Highly recommended!