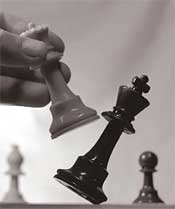 We are all for peaceful globalization, but not this way. Globalization via socio-economic measures: Yes. Today! Globalization via war and violence: No, we want no part of it. There was a meeting in Yalta just before the recent Georgia-Russia war. Present were, among others, the President of Georgia, Karl Rove (former Chief of Staff to President Bush) and Tony Blair. If you don’t believe this, check it out at this website: http://www.yes-ukraine.org/en/index.html

Now, is this significant? Has it anything to do with the outbreak of war between Georgia and Russia? We don’t know. But it is possible. What we do know is that Europe has to be very careful not to find itself suddenly at war against Russia. This is not to defend Russia in any way as a fine example of freedom and democracy. It is not. It has turned in a short time from communist brutality to capitalist brutality. A KGB-democracy is not a democracy.

But a CIA-democracy is not a democracy either! It appears that there are people in the US administration who are hell-bent on triggering wars. While President Bush and John McCain complain that ‘in the 21st century countries do not invade other countries’ the US are operating in Iraq and Afghanistan, two countries the US invaded only a few years ago. This really is the ‘mother of all double standards’.

We draw the reader’s attention to an interview on Russian Television with Paul Craig Roberts, a former assistant secretary to the treasury in Ronald Reagan’s administration. He warns that if Europe stays allied with the US, it will be sucked into a war against Russia. Perhaps Mr. Roberts overstates his case a bit, but we recommend you take a few minutes to listen to his comments anyway (watch video).

Meanwhile Ukraine president Victor Yushchenko has said that the situation (in Georgia) was unprecedented and showed that his country could only ensure its national sovereignty through collective security (meaning with Europe and NATO). Clearly the situation is dangerous. The only good thing about all this is that meaningful opportunities for peace will also come along. With a bit of luck the stupidity of war will make people see that we need a new economic paradigm to prevent war. The blueprint for this paradigm is already in place. We call it ‘Solidarism, the Just Third Way’. Its economic theory is known as ‘binary economics’. Please refer to our knowledge center for more info on this