What’s with the orange??

When you walk the streets of Oranjestad or Jeems or Golden Rock, you see a lot of orange. Orange blossoms flowering, cars painted orange, and a lot of orange t-shirts.

There is a group of kids - they call themselves ‘TCS’ - that made this orange color into a cult. They explain why:

When was the Crew created?

‘Thursday September 13th, 2007 was the day we decided what our crew color was going to be. There were many colors we could have chosen, but we decided to go with orange because: We now live on Statia, which is part of the Netherlands Antilles. And the head of the Netherlands Antilles is Holland and that is where the Queen lives. And Holland’s color is orange. The Queen’s color is also orange, and the Queen is Royalty and High Class. So because our name has the words “Top Class” in it, we chose orange, because for us orange means High Class’. 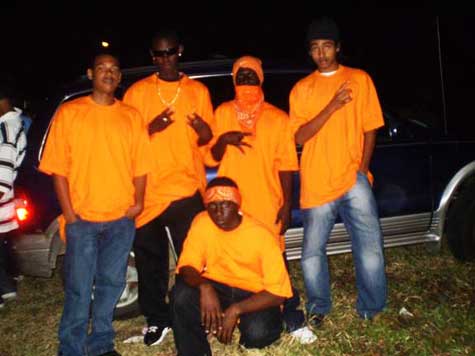 “Well, the answer is easy. Everyone of us has a way of doing things at its very best, so that’s where the ‘Top’ comes in. And everyone has its own category, for example we do things on a certain level, now this is where the ‘Class’ comes in. Now the ‘Souljahz’ is actually supposed to be ‘Soldiers’, but in the Caribbean we use slang-talk, so that’s why it is ‘Souljahz’. We call ourselves ‘souljahz’, because we are built tough. And because we don’t run away from any problem. We deal with it just the way it comes. And that’s where we got the name ‘Top Class Souljahz’.

Who can you see who belongs to the ‘TCS CREW’?

‘All of us usually have bandanas (a nice piece of rag) hanging out of our pockets. If one of us does not have the bandana at the moment, if you look really closely, you will see something on them that is orange. There are also chains created out of orange colored beads around the neck of the person to indicate that he or she is a TCS or you can look at the shoe string, some of us have orange colored shoe strings in our shoes to indicate that we are in TCS’.

Members Of the Crew

‘TCS has a maximum of 21 members, 12 Boys and 9 Girls. The boys were there long before the girls. The girls were more like fans of the TCS, but in February 2008 we decided to add girls to the crew so it can be more creative. The youngest member in the crew is 13 years of age and the oldest is 18. Here are the names of the girls and boys and their nicknames’.

More About the Crew

‘Our crew loves to go out and eat somewhere fancy. We love hanging out with each other and making all sorts of jokes. If there’s anyone who’s willing to join the crew, they will have to report to the Leader, Gwensly Spanner. He will decide if he or she enters the crew with the help of his members. If the individual has any sort of problem with any crew member, then he or she will not be accepted in the crew. Our crew is a new breed, it has just been unleashed and now we’re getting more publicity and that is why many other crews have such a big problem with us’.

‘As we always say ‘Top Class Souljahz’ are too Top Class to be wasting time on those who hate us’.